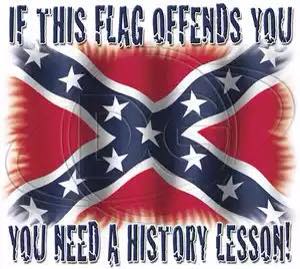 “I’m sorry but I’m about to preach and teach!! If you want to fight a cause, understand what you are fighting. First and foremost the Confederate Flag was never …a national flag representing the South, it was a battle flag flown by several armies in Virginia. Even if it had been a national flag for the South, understand that the Civil War wasn’t just over slavery, while it was the reason slavery ended, it was merely an excuse for the war. The North fought the war over money (the same reason we fight half the wars these days and excuse it by saying we’re fighting for another cause. Plain and simple. When the South started Secession, Lincoln was asked, “Why not let the South go in peace?” To which he replied, “I can’t let them go. Who would pay for the government?” Sensing total financial ruin for the North, Lincoln waged war on the South. The South fought the War to repel Northern aggression and invasion, because, and yes this is a true stereotype, us southerners don’t like to be told what to do! Lol. The Confederate Battle Flag today finds itself in the center of much controversy. The cry to take this flag down is unjustified. It is very important to keep in mind that the Confederate Battle Flag was simply just that. A battle flag. It was never even a National flag, so how could it have flown over a slave nation or represented slavery or racism? This myth is continued by lack of education and ignorance.”

With the horrible shooting in the South Carolina Church (I pray for all those that lost loved ones and I do hope that they receive justice) people  are up in arms about a flag they know very little about.  So let me give ya’ll a little history lesson as a public service announcement from JustUsOwls.

First of all this flag is not the flag of the Confederate States of America (CSA) rather it is the battle flag of the 1st Virginia Infantry (as well as Army of Tennessee)!

The CSA had a total of three flags during their time as a country.

This first flag caused to much confusion as to who was CSA and who was USA. It is referred to as: “The Stars and Bars!”

This flag is nicked named: “The Stainless Banner.”

Please get your historical facts correct when you are going to go on a rant.  While there are countless opinions as to why the Civil War was fought please remember we are one country now and should know the entire history of our country no matter how dark it is.

Setting Sail for an Abundant Life. . . by Wil Robinson

Pondering through the brambles.

Quietly walking within natures limitations. Colourfully doodling in the margins. Discovering spaces to share the stories of Jesus.

About me and the world I live in

It Is What It Is

BY GRACE THROUGH FAITH

Battling chronic illness(es) one day at a time...

At DX Engineering, Amateur Radio is what we know.

A Bishop with a Keyboard!

my adventures as a mom

Observations and random thoughts from a "not so teenager."

The Art and Craft of Blogging